Abi once found herself alone and with little or no resources, stranded in an unfamiliar city but determined to thrive. She found a job at a youth hostel in Seattle that put a roof over her head, but still needed money to afford food and other essentials. That’s when she found Millionair Club Charity.

“When I got to Seattle I was destitute, pretty much starving,” Abi said. “MCC saved me from what could have been a terrible situation, I owe you so much for helping me.”

MCC was able to get Abi bus fare, clothes, food and day jobs doing landscaping and cleaning at houses and apartments around Seattle. She met people who taught her more about gardening and flipping apartments, earning her own money and building valuable skillsets. When Abi was able to move back home to New York, she took those skills with her and started her own business.

“I had gone places that gave me free food and shelter, but a job makes such a difference in someone’s life,” Abi said. “The jobs helped me become independent. When you have hope and responsibility and a reason to try harder and be better, it’s almost like a rudder of a boat – it gives you direction.”

Abi now lives in New York with her husband, two sons and dog (pictured), they run a trucking business and Abi even graduated from Columbia University. She looked up MCC to see if we were still around, and we are so grateful for her sharing her incredible story with us. Stories like Abi’s are why we’ve focused on connecting people to jobs and vital support services for 100 years. 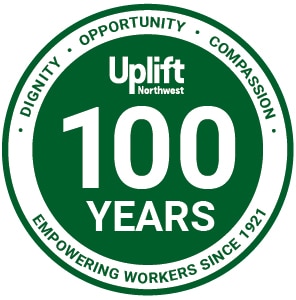